By our third day in Luang Prabang we had started to get our shit together and organized full day of elephant trekking. Elephants had been available in several other cities, including Chiang Mai, but we heard they were better treated in this camp, so six of us signed up for a day of elephantitis (is that not how you use the word?)

As with any tourist activity in Southeast Asia, our van driver came bright and early to pick us up – and take us to a few shopping areas before bringing us to our desired destination.  Our first stop was a store in which they spun straw into gold – or more accurately, elephant shit into expensive natural paper.  Gross, maybe, but I have an obsession with notebooks and ended up buying a shitty notebook while I was there. After that it was onto Xang Hai Village AKA Whiskey village.  There were several shops selling trinkets and souvenirs and a whole lot of Laolao for sale. 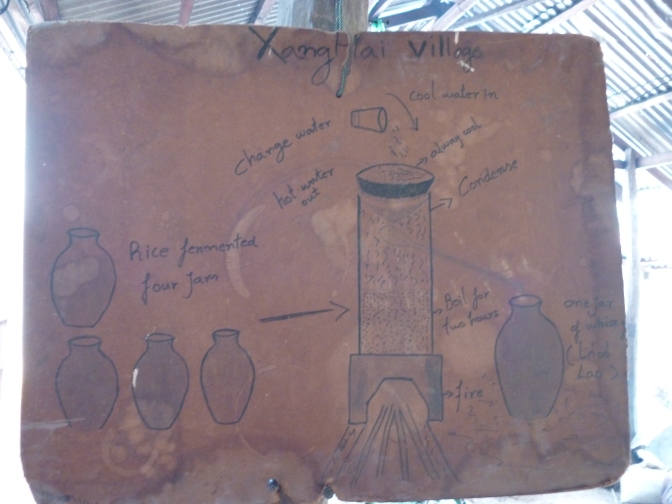 Upon arrival we took three shots of Lao wine (do not recommend) and then proceeded to do shots at each distillery.  We explored for a while coming across a variety of bottles including some with with scorpions, snakes and bear paws – oh my!   Because nothing screams “MASCULINITY!” like drinking moonshine infused with cobra and scorpion venom, or virility like drinking something filled with bear feet.  Yuck.  Bare feet.  I also started to wonder if I could get a DUI on an elephant…

After some time exploring, a bit tipsy, we hopped back onto the bus and headed to the elephant village.  My first impression of the elephants was that they kind of seemed sad.  They were laden with a blanket padded, wooden bench for two people on their backs, and a third person sitting on its neck.  They trudged slowly across the camp – whether it be from the load, or the heat I will never know.  At first I was a bit hesitant to get on, but since I had already paid for the day I figured I’d just go through with it – not my finest moment in upholding personal ethics.  I tried to justify it by thinking at least I’m a light passenger.

Once I was on the elephants neck, my concerns shifted from the elephant to my typical self-centeredness, as sitting on an elephant’s neck is not exactly comfortable – or sturdy.  I constantly felt like I was going to slide off, and there was nothing holding me in place except my inner thigh muscles.

Back to concern for the elephants, they had a very loosely tied leash around their ears, which the trainers barely used, since the elephants seemed to know exactly where they were going.  They also knew where the best leaves were so we made frequent stops whenever the elephants felt like snacking.

Once we got back to camp we hopped off, and in the never ending sales pitch land of Asia, we were offered the opportunity to buy bananas to feed the elephants.  There was a little girl no more than four years old selling bananas who was amazingly adept at counting money.  She was however, woefully incapable of stopping a 4 ton elephant from taking whatever bananas it felt like eating. 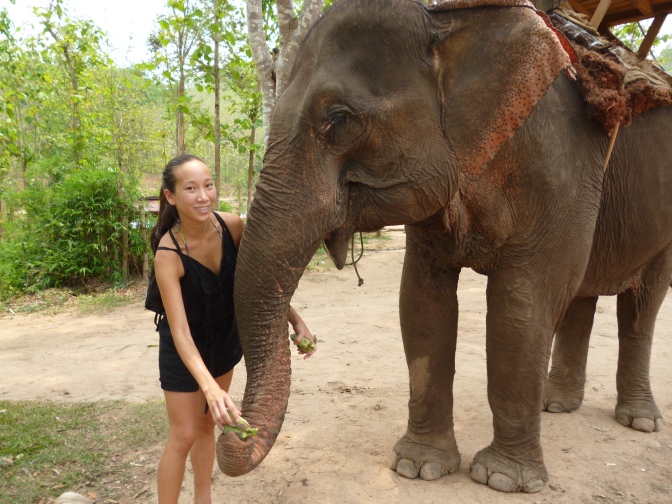 While I’m sure being captive and used as a form of entertainment isn’t exactly the idea life for an animal, the elephants didn’t seem to be worked too hard and the trainers were nice to the elephants – unlike rumors I’d heard about other elephant camps where the trainers yelled and threw rocks.  And the elephants were definitely well fed so that’s a plus. 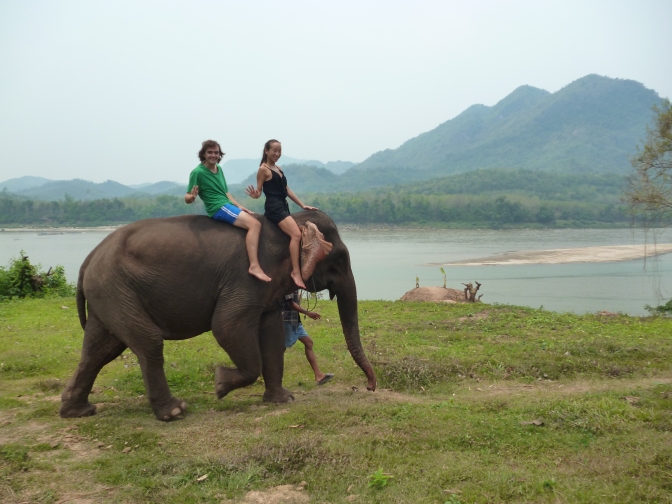 As we walked around the trainers took our cameras to take pictures of us which would inevitably end up on facebook, instagram and various other social media platforms on which we would brag about riding elephants.  At one point I was paired up with my Belgian friend who I noticed was making weird movements behind me as pictures were being taken.

Me: What are you doing?
Belgian: I’m trying not to be in your pictures
Me: We’re sitting on the same elephant….How exactly do you expect to do that?
Belgian: …
Me: Just smile and get in the pictures damnit!

After a quick tour by the river, we were told it was time for “elephant swimming”.  Not sure what that meant, we hopped onto the elephants and headed down the steep, muddy river bank to the water.  Thinking we would stay on the shore while the elephants shot water at each other, we were surprised when we started walking into the dirty ass Mekong River.  At least they had given us the courtesy of telling us to leave our cameras and sunglasses at camp.

As we walked further into the water, the trainers said something to the elephants which sounded like counting, and then the elephants reared up and dumped us all into the river.  And as we were swimming back to get on the elephants, one of the elephants also took a dump in the river – thereby better explaining the color of the river, and soft mud we had put our feet in when we went for our swim.  Fabulous.

All having been adjusted to the dirt of Southeast Asia, we still found the water somewhat refreshing despite the fact that we were basically swimming in elephant sewage.  The trainers had us stand on the elephants and then get tossed back into the water.  In its own disgusting way, it was actually quite fun.

After about half an hour of doing this, we started to tire of swimming in shit and told our guides we were ready to go.  Cely grabbed her waterproof iPhone back from the guides, and as we all jumped back on, the elephants reared up again tossing us all into the water – and Cely’s phone from her pocket.  This initiated the frantic search for her phone on the bottom of the Mekong as the phone slowly sunk into the muddy, shitty depths of the river bank.  It also wasn’t helped by the fact that no one was too enthralled with the idea of spending extra time in the water, or even attempting to open their eyes under water.  I’m almost positive that shit in your eye is exactly how you get pink eye.  After about half an hour of sitting on the elephant on the bank of the river (which is actually quite painful), the Germans and I headed back up to the camp.  Ten minutes later, everyone else came back up – with the phone!  Props to the guides – and life case, at least for those who remember to put their plug back in.  As far as literal shit filled days go, this was probably the best one I could imagine having.