Heading out in the early evening for some cocktails, Handsome and I were going to meet a future coworker of mine – the future being dependent on whether or not I passed my training I was heading to on Saturday.  Unfortunately being guided by a time efficient Dane, we arrived early for the first time in my American life and the bar wasn’t even open yet.   Being slightly familiar with the area after my last trip to Denmark, we headed over to Kung Fu II Izakaya Bar, a place we had eaten at last year that had good food and excellent cocktails.  And really who wouldn’t enjoy a Kimchi Bloody Mary made with tequila.  Actually, I’m pretty sure if I had access to this drink in New York I’d be more inclined to be hungover more often just so I could drink this in the morning.

After a quick round, we headed back over to the meeting spot where my new coworker was waiting for us.

A quick note on Danish Culture:
Don’t get me wrong.  I love Danish people.  I’ve traveled with several Danish people.  Some of my good friends are Danish.  Some of my best meals are also danishes.  But Danes are probably some of the least open people I have encountered while traveling, not to say that they’re rude.  If you ask a random American on the street for the time, they’ll give it to you and see it as a foot in the door to start a conversation.  If you ask a German he will give it to you and continue on his way.  If you ask a Dane, they’ll give you a look like you just asked if you could use their Legos to build a giant dildo and use it to violate everyone in Copenhagen.  Starting a conversation with a stranger in public is a complete social taboo, and from my experience, even meeting friends of friends can be a trying experience as it takes a while for them to warm up.  Of course once you’re friends with a Dane none of this is applicable.

So, although she had been nothing but friendly when we had spoken on Facebook, I never knew what an in person meeting would bring.

As soon as we met up, Chatty gave us both a hug and immediately started chatting with us about herself, our upcoming job, what I was doing in Denmark and everything else under the Danish sun.  Everyone quickly felt comfortable and it was more like hanging out with an old friend than meeting a silent Danish stranger in the bar.  In fact, I’m pretty sure she must have been American or something since there’s no way a Dane could be this friendly, this quickly.  The cocktail bar having amazing drinks at 2 for 1 probably didn’t hurt either.

A few hours and half a dozen rounds later we made plans to meet up on Saturday for our flight to Croatia and parted ways.

The next day it was go time for Handsome’s housewarming party, a Danish tradition that I would get to experience first hand.  The previous year when I had went to his Aunt and Uncle’s “Copper Anniversary” celebrating 12.5 years of marriage, I got to experience tons of delicious food and wine, a new flag pole, and spontaneous bursts into song in the middle of dinner.  I could only imagine what the festivities would be for a housewarming party for a bachelor pad.  The only thing I had been warned about beforehand was that the party wouldn’t get going until about midnight and that I probably wouldn’t get any sleep before heading straight from shots of licorice schnapps to the airport at 4 a.m. and then to a week of training on a yacht.

Not wanting to be a party mooch, I had brought some good ol’ American spirits from Duty Free (Honey Jack and Tito’s) and told the guys that I would fold around 200 dumplings for the party.  If I was going to be at a party surrounding by Vikings I was damn well gonna make them drink a little American, and eat a little Asian.  That sounded weird, but you get what I mean.

Despite being told that the party wouldn’t get going until midnight, the first guests started arriving around 4 o’clock.  I had met these guys before so I was spared the awkwardness of trying to make friends with silent Danes who have yet to consume large quantities of alcohol.  They had brought a Magnum of Grey Goose and one guy swore he would not leave until it was finished.  I didn’t doubt his claim. Especially later when I saw and empty magnum on the counter and found him trying to exit the apartment through the closet door.  Drinking had officially commenced.

Not long after the first group came in a second group of guys appeared with the first housewarming gift.  One of Handsome’s roommates stood holding a wrapped box while a commotion started occurring in Danish on the other side of the kitchen.  The wrapped box was opened and it contained what appeared to be an empty egg carton which seemed like a strange gift to me.  Then the other gift was placed on the counter. 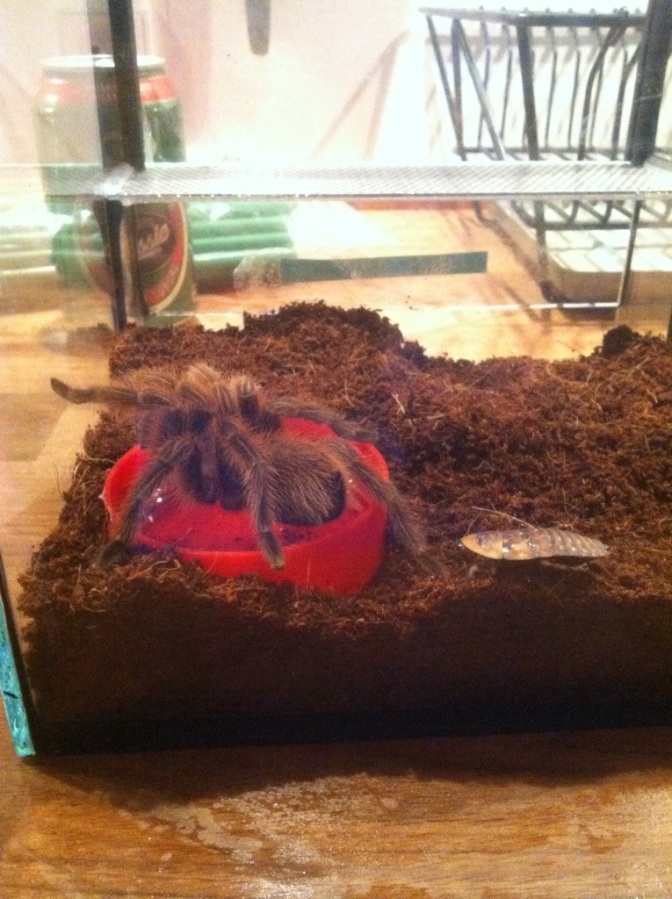 WHAT THE FUCK!?  The new arrivals had brought them a brand new pet – a large, hairy tarantula and the egg carton contained thumb sized cockroaches for it to eat.  The “gift” was an ongoing joke between a few of the guys where whenever one of them moved into a new place, the others bought him a shitty pet.  One of the other guys had received an extremely loud and obnoxious bird and told me, “At least we didn’t get him a goat.” I was thankful to be moving out later that evening.  I also noted, to never celebrate an occasion that might warrant gifts in Denmark.

Over the course of the next few hours more and more people arrived and more and more alcohol was consumed.  I was wisely only sipping drinks since I had the feeling that showing up to a week’s worth of training confined on a yacht probably meant I shouldn’t arrive drunk and hungover.  On the downside this did heighten the fact that it was a bit difficult to start conversation with most of the guests, except for people I had met on previous occasions.  And seeing as Danish is basically a useless language spoken by only 6 million people, pretty much all of whom also speak English, when you get a room full of Vikings together they’ll be damned if they aren’t going to use their language in one of the few places they can.

Fortunately after enough alcohol consumption, just as I suddenly gain the ability to converse functionally in French, Danes suddenly realize that they speak English better than most non-native English speaking countries.  That being said, after about 4 hours of drinking (because it takes enough alcohol to kill an elephant before Danes even seem drunk) I started to meet some new people.  One guy I started talking to was in the Danish Army and had some experience working with Americans on the battlefield.  He started kindly by telling me how they were some of the best soldiers and great at taking orders.  On the other hand he told me an story about how when he was in the Middle East somewhere he was shoulder to shoulder with some Americans, and while he was taking cover in a ditch during enemy fire, the Americans were standing up.
“Why don’t you lay down?”
“I’m shooting at the enemy”
“Yes, but you could do it better from laying down where you won’t get shot…”
“I was told to stand up for my country.”
Not sure if this was a humorous anecdote or a true story, but he did tell it to me with a straight face, and for some reason I believe him.

His other funny American story came when I asked him if he had ever been to the states, and he mentioned that he had been in Oklahoma.  For the love of all things American, why Oklahoma?  Apparently he had family over there that he had visited as a child and while he was there, needless to say he had been pretty bored.  One afternoon he realized that there was a pool nearby and he asked his aunt if he could go there and go swimming.  She told him “No, it’s dirty because there are negroes there.” “I thought it was just people.”  When a blonde haired, blue eyed, Hitler’s wet dream looking child in a country full of other Aryan nation looking Vikings has a better perspective on the world than a fully grown woman in a country based upon diversity- we know we’re failing somewhere.

Getting a little too deep into the shitty side of my country I wandered off to find Handsome.  “Risa!  Meet my good friend!”  I shook hands with his friend and tried to remember where or whether I had met him before as he looked incredibly familiar.  “I believe we’ve met before,” he said after a brief stare down.  “On Skype…in Cambodia.”

Flashback to being in Cambodia with Handsome last May.  Say what you will about the Full Metal Jacket Stereotypes but there are literally as many prostitutes as there are tourists in Southeast Asia.  We literally could not walk anywhere without running into solicitation, and as an Asian female I had my fair share of creepy old white dudes approaching me and trying to find out the price for my goodies. As a joke one day I decided to get on Skype with Handsome and his friend and pretend to be a prostitute he had picked up the night before.  The aforementioned friend was the recipient of lines such as, “My name Sunshine, I make rise in morning,” and “Your friend, he good man but I have go now, he pay me now,” and “You want ping pong show for friend in Denmark you pay extra.”  I seriously make great first impressions.  And I don’t think we ever got to clarify the joke as the internet went out.  Fortunately he was able to believe that I had indeed fully assimilated into American culture and my Asian accent was now barely detectable.

After that encounter it was agreed we needed some Extra Joss shots to affirm our friendship, and the night continued normally from that point on.  The Danes got more and more friendly and English speaking, and the beer and liquor continued to go down like a five dollar hooker.  Alas, all good things must come to an end, and at around 3:30 we headed over to the train station to meet up with Chatty.  I said some sad goodbyes to Handsome and headed to the airport, slightly buzzed and very exhausted where Yacht Week adventures would be awaiting me.