After a fun, but not so relaxing couple of days on Corfu and Erikoussa, Handsome and I decided take a last minute ferry over to Albania in hopes of a) spending less money, b) being somewhere less touristy, and c) finishing my quota of visiting three new countries every year.

Before arriving, this is what I knew about Albania

An hour ferry from Corfu Town later, Handsome and I arrived in Saranda aka The Albanian Riviera.  Aside from the disorganized as hell port, and aggressive security personnel I was blown away at arrival.  I was expecting something like the Eurotrip movie depiction of Bratislava, but what I got was a beautiful, tourist friendly coastline filled with hotels, restaurants, bars, clubs and carnival rides.  The way the coastline hooked into a natural bay with hotels and kiosks dotting the shoreline almost reminded me of a bootleg Rio.  Almost. 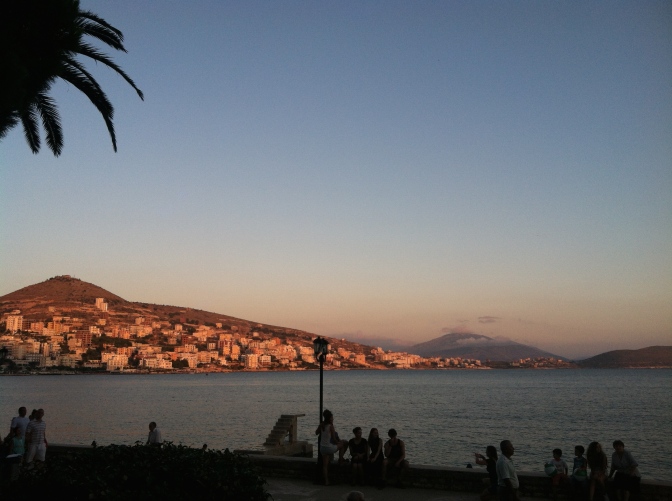 As a consequence of not booking anything ahead of time once we arrived we had no idea what to do or where to stay. Fortunately, after strolling along the beach for a few minutes we were able to find a cute villa with air conditioning and wifi at a reasonable price and most importantly, it didn’t look like something out of Hostel.  The next order of business was to feed the fat American.  After a weekend in Sidari with over touristy restaurants and zero percent satisfaction with any of the restaurants I had eaten at, I was dying to have some good food, but knew basically nothing about Albanian cuisine.  As a recently employed, semi-professional cook for drunks, I found this shameful, and in the name of professional curiosity we set out to try some local dishes.  Or I just have an unhealthy obsession with food.

A quick walk down the waterfront later we decided on a restaurant that had a giant fresh octopus sitting on ice next to the menu.  We ordered a grilled seafood platter and at our waiter’s recommendation, “meat with vegetables” which he assured us was one of the best items on the menu despite it’s yawn inducing description.  And right he was, because despite wanting to eat light, the lamb with steamed potatoes that had soaked up all the lamb fat is about as good as it  gets. 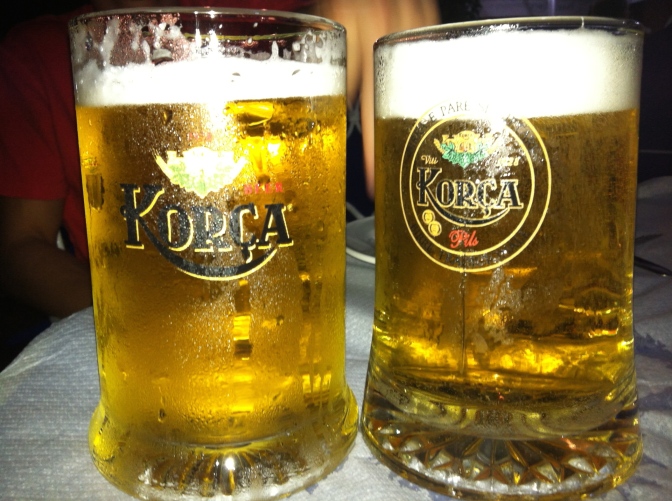 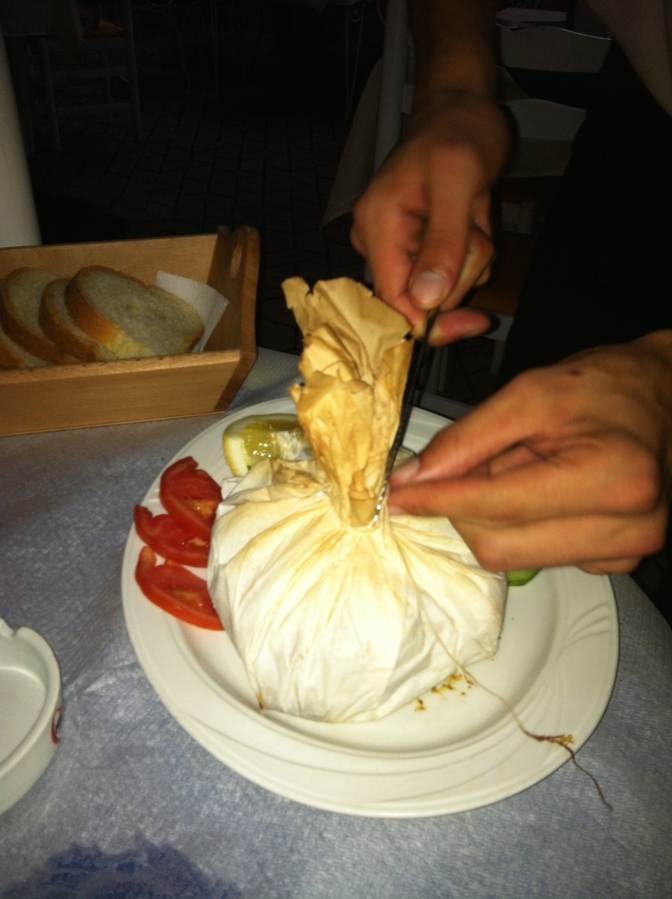 The next day it was time to explore the town a bit AKA we woke up too late to do anything else.  We took a stroll along the coastal road and checked out the various restaurants, hotels and bootleg boutiques selling Chanel bags for $50.  And of course ate everything in sight.  And while the main area of the city was a tourist heaven with everything someone on vacation in a “discount” country could want, once we wandered a bit further outside of town we realized the city was in the process of a serious facelift.  On either side of the main stretch, hotels and apartments were being developed, but looked as though some of the work had come to a halt.  Whether that be because of the season or funding I have no clue, although if word were to spread about how good the main beachfront looks, there’s no doubt in my mind that Saranda could be a next big holiday destination.  Also, once we ventured one or two blocks off the main street, houses were a bit more rundown and covered in graffiti.  So take that for what it’s worth, but I would love to come back to Saranda in two years and see how it has changed. 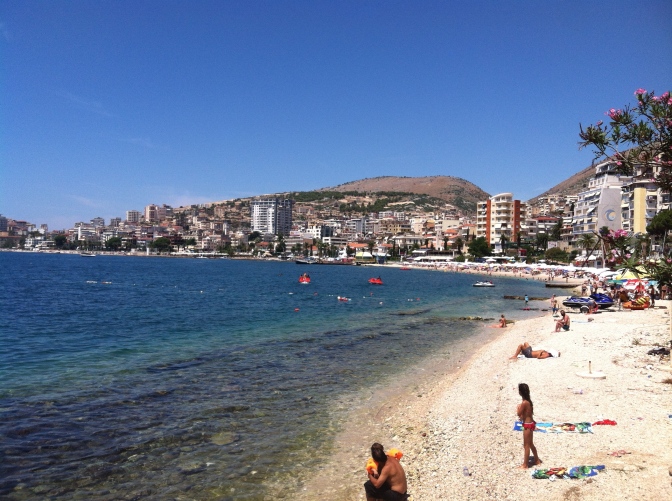 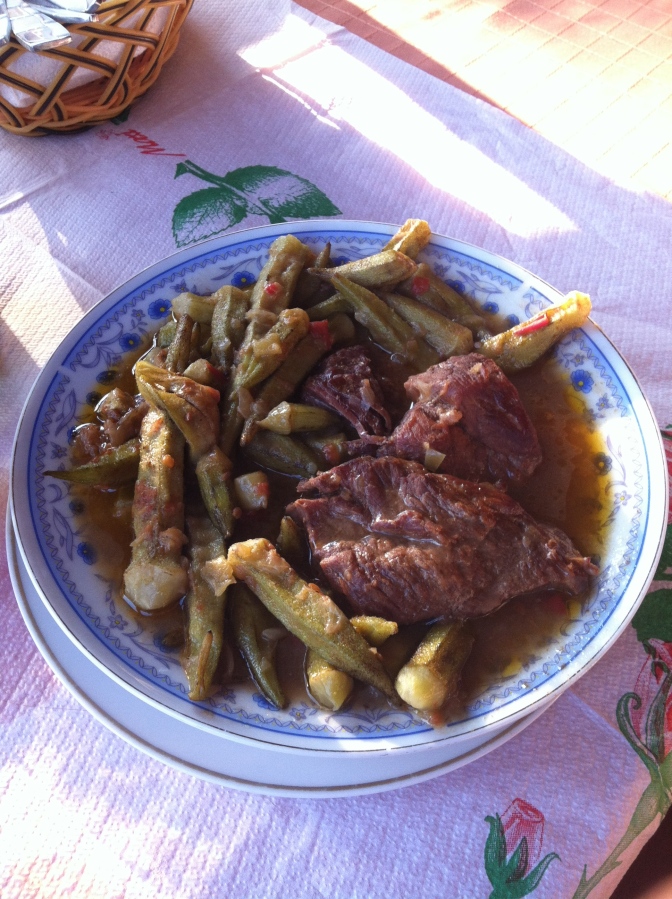 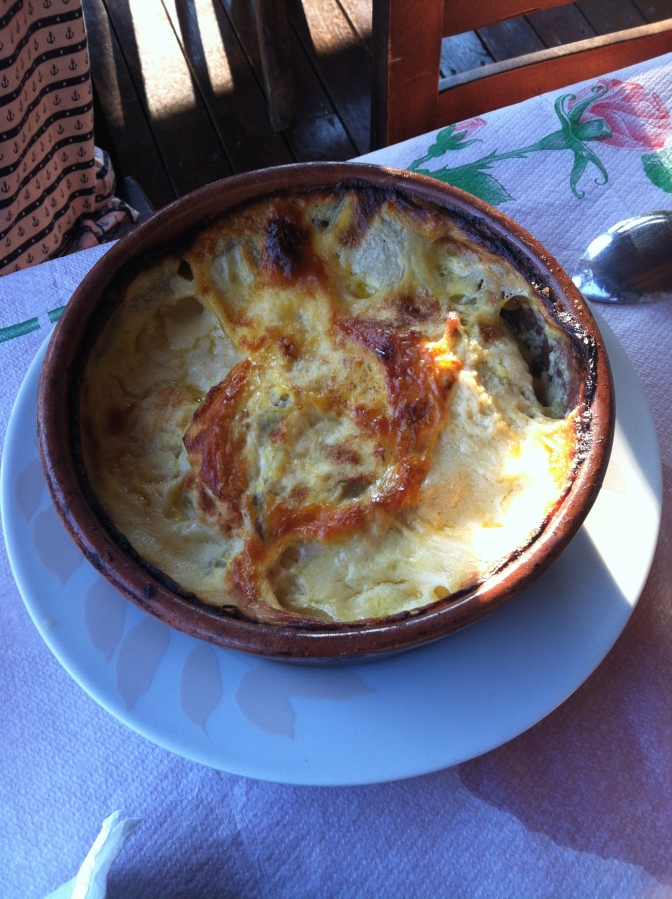 On our third and last full day in Albania it was time to do something productive.  After checking wiki travel we found out that there was a UNESCO site nearby so we decided to head over to Butrint for some culture.  An hour bus ride later we arrived at Butrint National Park which housed the ancient Greek/Roman ruins from one of those centuries where Romans and Greeks alternately took shit over from one another.  The site itself was super picturesque and pretty open – and by open I mean you could basically walk on/touch everything, as long as your ninja skills were up to par and you didn’t get caught. 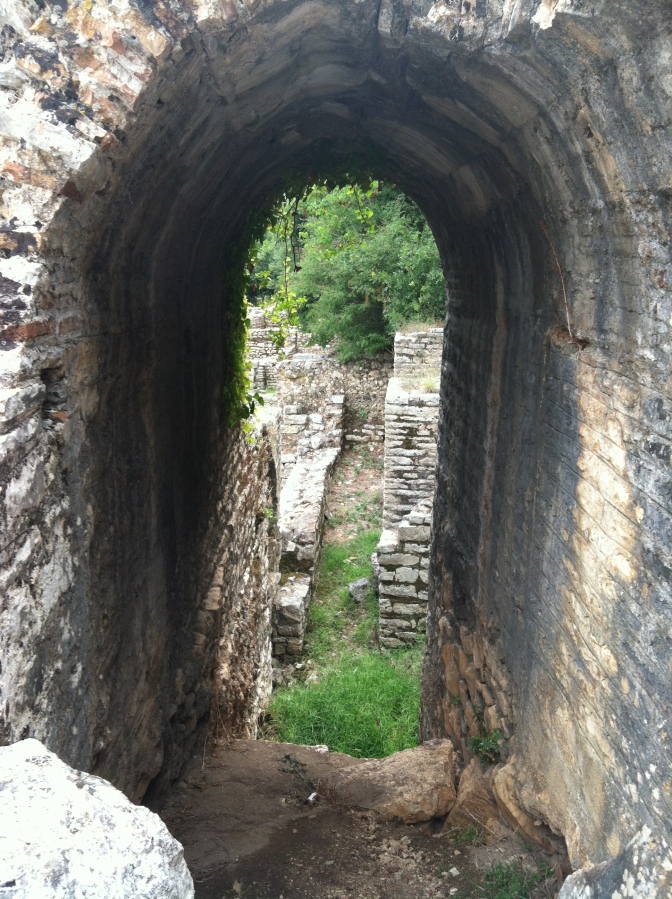 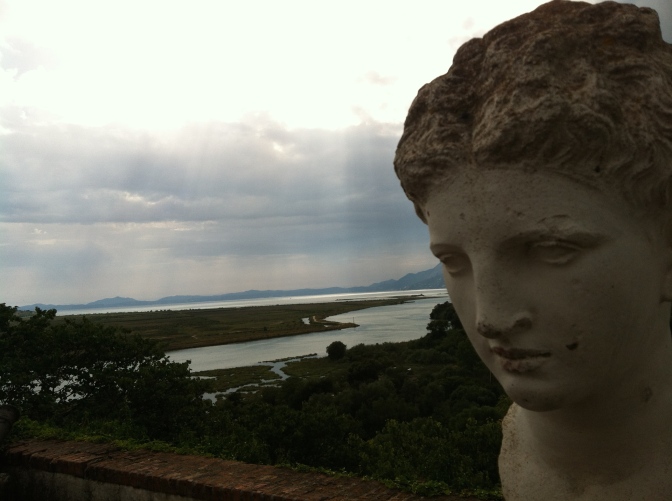 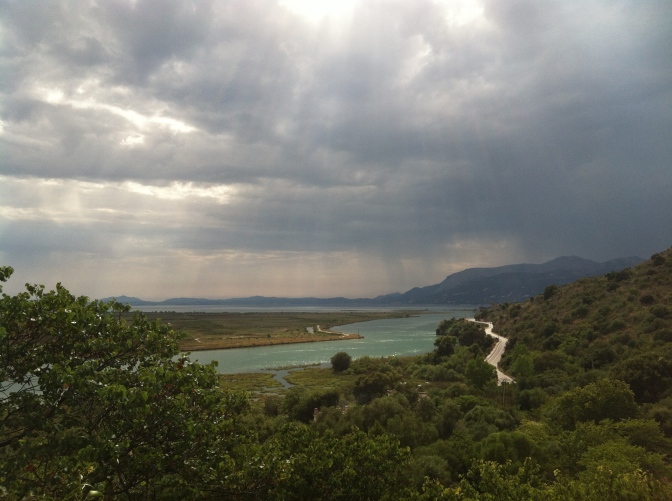 And of course after a long day of sweating through tourism some food was in order.  Fried local eels and mussel stew for a snack followed by dinner at Nostrum Mare.  I had intentionally aimed to avoid the number one recommended restaurant on Trip Advisor because after perusing the listings, I got the feeling I was reading reviews by people who think that spicy tuna is the pinnacle of sushi. However, purely by accident, we ended up at the number one suggested restaurant, and by golly – those faux bougie foodies got it right for a change!

Since we had amassed a decent amount of lek and were leaving the country the next day, Handsome and I decided to go all out for our last dinner together.  Accordingly, dinner started with wine and came with complementary fried bread dusted with parmesan and parsley.  Our second course was their “Egypt Salad” which was probably one of the best things I’ve eaten all trip.  It was arugula topped with ginger soaked beets topped with fresh local yogurt (they really love their yogurt in Albania) and drizzled with a balsamic glaze.  The next dish was equally as delicious – octopus in a white spinach sauce that tasted of cream, garlic and tarragon.  Calamari on yogurt sauce (told you) came next, and it was fresh and tender.  Our final course was a grilled branzini stuffed with shrimp, mussels and assorted shellfish.  A perfect last meal. 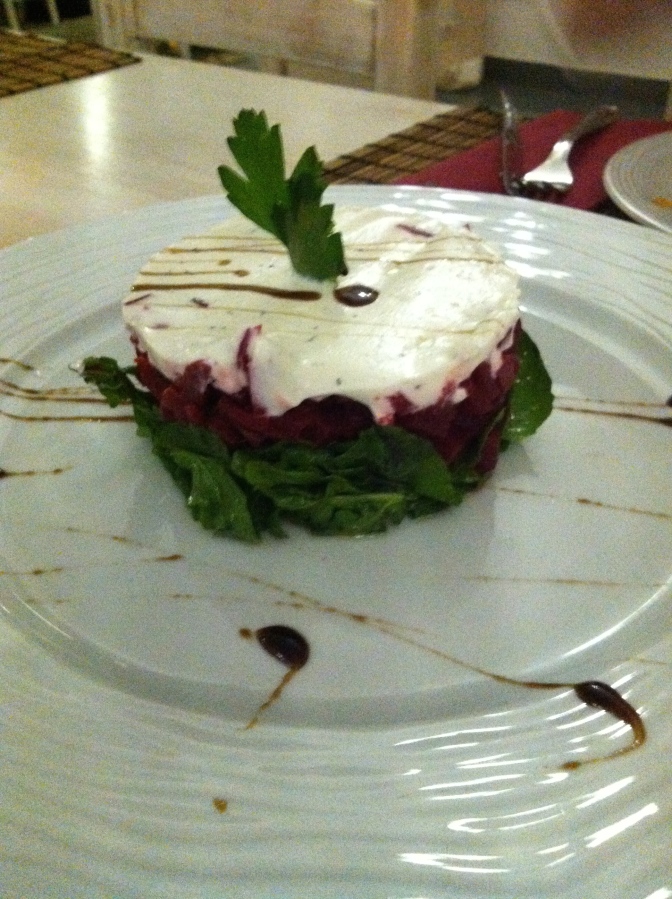 Sadly the next day it was time to leave Saranda and part ways with Handsome.  After saying our goodbyes in Corfu, I headed to my flight back Croatia for my last weeks of Yacht Week.  But of course nothing can be that easy and I got stopped at customs.

Customs Officer: (looking at my passport) Where did you first enter Europe?
Me: Denmark
CO: This stamp says you left Denmark
Me: oh, right…I went to Croatia after and then reentered Europe through Italy
CO: What’s this stamp?
Me: oh, uh Albania, I went there for a few days and then came back to Corfu this morning
CO: And what’s this? (Shows entry stamp through Berlin)
Me: Isn’t that from last year?
CO: Thats from a month ago
Me: oh yeah, I was in Split for a month then went to Italy with a layover in Germany through both airports and then went to Italy then Athens and Corfu then went to Albania…
CO: Forget it. Take your passport back. 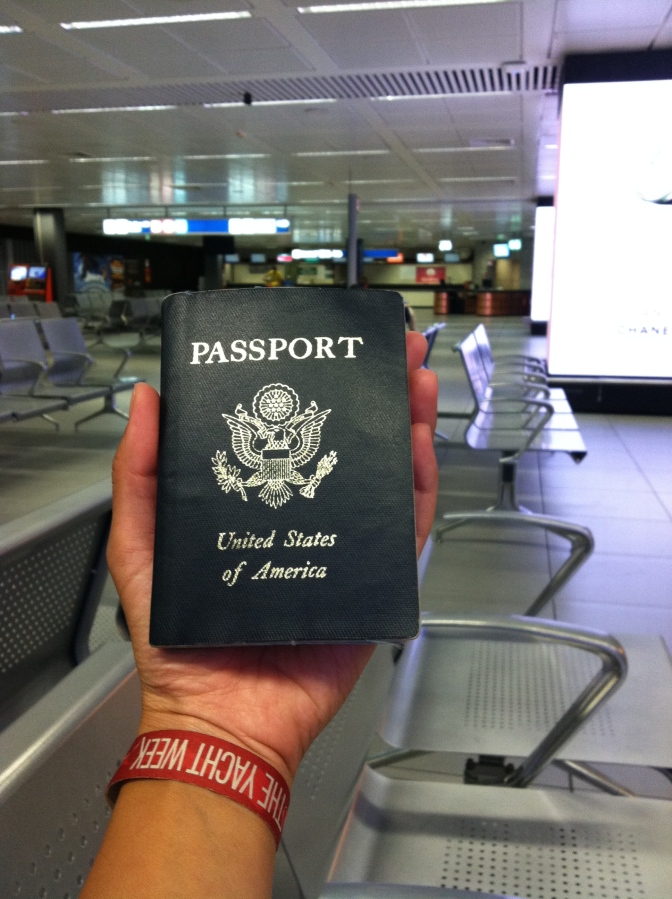