In trying to teach my sister self sufficiency in traveling, I had her practice by getting up at 7am to book us a day trip to Volcán de Lodo el Totuomo AKA the Mud Volcano of Cartagena, while I stayed in bed and slept.  Her mission was a success, and by 10:30am we were in a bus full of middle aged spanish speaking tourists.

Despite there being only about half a dozen non-spanish speakers on the bus, they did the informational briefing in both Spanish and incomprehensible english.  Accordingly, we befriended the Argentinian girl sitting behind us, and took advantage of her translation skills.  Because, cheap South American labor.  An hour later, we arrived at the volcano.

The national park where the volcano was located was a desolate dust and dirt area, with a few makeshift buildings along the perimeter selling souvenirs and food.  Our bus dropped us off at the “office” which was a set of cement walls with some lockers where we were instructed to  leave our valuables.  Valuables that would be locked up with everyone else’s valuables, and could be retrieved at any time. Fortunately my “valuables” consisted of about $50 and an iPhone 4 (hence the shitty quality of my pictures).  MuiMui took her fancier iPhone and gave it to Edgar the designated photographer who would take pictures of us in the mud bath for 3mil pesos, or less than $1.50.

Stripping down to my bathing suit, I looked at MuiMui and saw that she had neglected to realize we would be getting into the volcano, and only wore her bathing suit top.  ::facepalm::  Have fun drowning in the mud with your heavy ass cargo shorts.  On the other hand, I neglected to realize that we would be walking across the road where all the tourist buses were parked to get to the volcano, and I had put on my Brazilian bathing suit – meaning I would essentially be mooning everyone.  ::buttpalm::

The volcano itself was not quite what I had expected, though I honestly didn’t know what to expect.  It was made of dirt and mud, and looked like a termite mound or the type of volcano a kid would make out of clay and fill with baking soda and vinegar.  According to the assholes of TripAdvisor it’s a shitty manmade molesting pit, and according to wikipedia, it was once the work of Satan, and spewed fire and ash until a priest dropped holy water in it.  Not doing research beforehand, I didn’t think to ask, and trusted neither of the aforementioned reliable sources*.  But I did like the notion that the minerals in the mud were supposed to have restorative qualities.  Whatever that means.

*turns out the volcano is a natural phenomenon, whether or not Satan played a role in it is TBD

Leading to the top of the volcano was a set of rickety wooden stairs that were haphazardly thrown into the side of the hill like something out of a Dr. Seuss book.  One stair two stair, you need some new stairs.

Climbing to the top, we stood on nerve wracking scaffolding around the mouth of the volcano while lined up like human sacrifices about to be tossed into the pit.  Peering in, I saw people crammed in like sardines, standing, playing in the mud or getting a massage from one of the baseball cap wearing men who appeared to be working.  Despite claims from the internet that these guys were overly touchy feely, I thought they seemed to equally be interested in rubbing down men and women, and not so much interested in a muddy gropefest.  Although to be fair, every woman’s boobs looked awesome since the buoyant mud negated the effects of gravity making us all look like we were wearing extreme push-up bras.

Actually getting into the mud was one of the weirdest sensations I’ve ever experienced.  Cautiously descending the stairs, I stopped when my feet were about to enter the viscous liquid.  My feet entered the sludge, which was surprisingly warm and had the consistency of soup with too much cornstarch.  The workers informed me that there was another step down and once I was submerged to the chest, they told me to get off the ladder.

I still couldn’t feel the bottom, but unless everyone else in the mud pool was a giant, I figured I shouldn’t be too far from the floor.  I released the ladder and started treading the cake batter mud to make way for MuiMui and the Argentinian.  I asked where I would be able to stand, and a mud covered woman informed me that there was no bottom… uhhh what?  I maintained my treading motions and unexpectedly my center of mass shifted and I started tilting face first towards the mud.  Straining to keep my head up, my feet flailed wildly toward the surface where I started kicking and splashing, panicking that I might meet my demise drowning in a muddy volcano in the middle of nowhere.  The masseuses started yelling at me in Spanish saying what I can only assume was “Calm the fuck down, china,” and slowly pushed my feet under the mud.  At this point I also realized it was physically impossible to sink as I was as floatable as the average fat person in a pool.  Weirdest sensation ever.  It was like being a human buoy – if only it was this easy to swim all the time.

Settling in a corner and playing in the gloop, we watched as two gigantic blonde guys, who I assumed to be Scandinavian, descended the ladder.  Being the only ones tall enough to grab the wooden support beams before entering, one of them proceeded to hang from a rafter and then drop in.  He immediately sunk and resurfaced unable to open his eyes as he looked like he had just starred in a mud bukkake film.  The workers were able to clean him up enough to open his eyes, before returning to their job of massaging tourists with obscenely visible packages via the heavy clingy mud hugging their swim trunks thereby highlighting their genitals.

After more time that I ever imagined I would spend sitting in a mud bath enjoying the sensation of being as unsinkable as the Titanic, the three of us decided to call it quits and head to the lake to wash off.  At the top of the stairs a guy gave us a “shower” aka tightly gripped our arms, legs and torsos and squeegeed us off over a grate back into the mud pit.  Was that the sexual harassment?

Carefully descending the slippery mud covered stairs back to ground level, we were directed to the washing area which was 150 yards down the road across the scorching dirt road, without our shoes.  We hot footed it to the water where the lagoon looked about as clean as a sewage tank.  Inside we saw a bunch of tourists being washed off by two pregnant local women.  Hesitantly we stepped into the cloudy water, and started splashing off some of the mud.  The women teleported to our sides, grabbed our hands separating MuiMui and I, and picked up a bucket, that looked exactly like the ones you use to manually flush a toilet in Asia.  They immediately started waterboarding us while wiping our backs, pulling out our ponytails and pulling at our ears in an attempt to either wash them or punish us.  After a few minutes, the woman switched her attention to the Argentinian and yanked her bathing suit over her head.  Before I could react, she did the same to me and as I went to cover my boobs, I felt a sharp pinch on my nipple.  Mother fucking fish bit my nipple!

The woman continued to alternate between dumping water on us and rubbing mud off our shoulders, then indicated that I should crouch down in the water.  She made a gesture indicating I should take off my bottoms, which after that last asshole fish, was not gonna happen if I wanted to leave my actual asshole unmolested. (Was this the sexual harassment?)

Fortunately, the torture ended as soon as the next people headed for the cleaning pool and MuiMui and I reconvened at the water’s edge where I learned that the woman hadn’t suggested she take her bottom off, but had just gone ahead and did it for her.

Was this sexual harassment?

Back to the office, after running across the hot dirt again, we took another outdoor, fresh water shower – thanks for letting us know that was an option, and ate a slice of watermelon.  Half an hour and a beer later, we were back on the bus sharing our tales of sexual assault with the two giant Vikings.  As it turned out, I had guessed right about their Scandinavian-ness and they were from Norway…no way!

We found out that being strip showered by local pregnant women was 3mil, as was the massage inside the volcano.  I definitely would’ve preferred spending my $1.50 on a consensual relaxing mud massage than a sexually assaulting waterboarding that included a nipple biting fish.  That’s what I get for not speaking Spanish and not bothering to ask questions.

After everyone was back on the bus, we made a stop at another dismal Cartagena beach where we were fed a satisfying lunch of fried/grilled chicken menu del dia.

As it turned out, the Argentinian and Norwegians were staying in the same hostel as us, and MuiMui suggested another sunset attempt at Cafe del Mar.  Which was a success.  Minus the part where it was to cloudy to really see the sun. 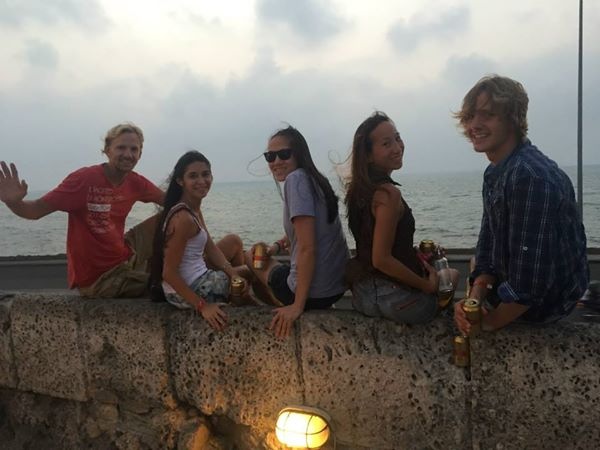 After the sunset and dinner (where we watched a Spanish TV program where a guy put on heels and a dress and reenacted the entire “Girls Just Wanna Have Fun” video while singing in an accented falsetto) the Norwegians and MuiMui decided a bottle of Guaro was in order.  MuiMui and one of the Vikings went to it pick up, then reappeared with a liter of my Colombian arch-nemesis.  I took maybe 5 shots then respectfully declined any more alcohol.  Accordingly I made it to bed safely and woke up without a hangover. 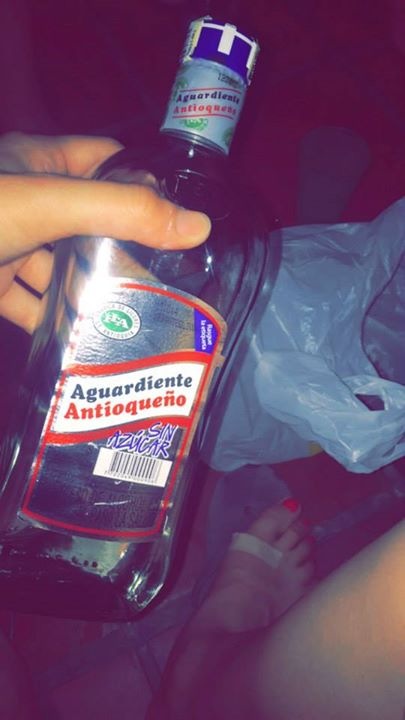 Now if I could only learn to always exercise moderation…

2 thoughts on “Adventures in Aguardiente: No Me Molestes at El Totumo Mud Volcano”