After the thrilling experience that was Cordoba I was really excited to get the hell out and into a big city. While I’m hopefully not the stereotypical New Yorker that is stuck up my own ass and obsessed with the idea of never having to leave the city for anything, there are certain things I really miss about big city life.

1) Variety of food. I want good Asian food when I want good Asian food and I want it now.
2) Diversity of people. While it’s funny to be a novelty sometimes (AKA Mira China!) I prefer to be somewhere a little less homogeneous
3) Everything at your fingertips. I don’t want to have to walk 10 blocks to find a deli that will sell me 7up (siete arriba?) and a sandwich.

So that being said – I was thankful to be heading to a Buenos Aires. And I really wanted a good steak that wasn’t overcooked.

Following another infinitely long bus ride which, once again I mostly slept through thanks to Quilmes (Quilmes -please sponsor me? I’m already running low on money, thanks!), we hopped in a cab and headed for our hostel. Even in the ten minute ride from the bus station, Buenos Aires was visually at least a billion times better than Cordoba. 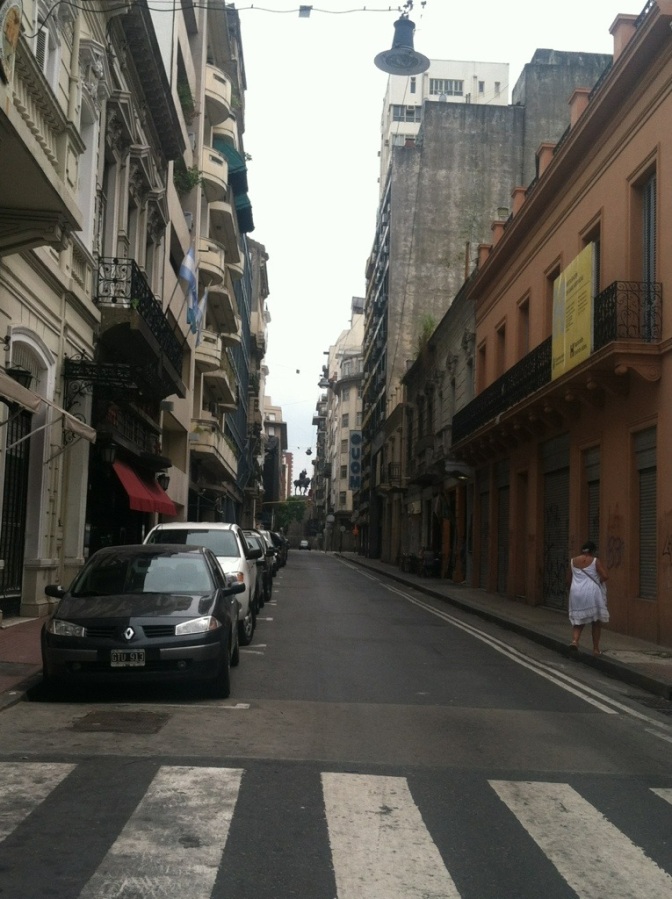 And although we had arrived before check in time at our hostel, we had the good fortune that our room was ready so we scrambled up, took a horizontal nap (as opposed to the 75 degree angle naps we get on buses) and went to use the wifi to check my “Shit I Need to Do” list. Yay wifi!

Looking around the hostel I began to notice that some of the signs weren’t in English which is typical, but they also weren’t in the English alphabet. After a quick scan of the room and seeing shwarma, falafel, hookahs and menorahs for sale at the bar it finally clicked. Mazel Tov! We had checked into an Israeli hostel. At least Mark could fit in.

Aracely and I were subtly but persistently missing sushi for the past week so we went off in search of a sushi restaurant. By luck we ended up in Puerto Madeira at a sushi restaurant along the water – which was soundly disappointing. What is with Argentinians and putting cream cheese in all their rolls? And again, with the portion sizes. The rolls were half rice and you could’ve drowned a small child in my miso soup.

Anyways, after lunch we went to check Caminito Street off my list which is an artsy (but tousity) area where all the buildings were colorful, there was tons of graffiti and a bunch of really cool art/sculpture combination pieces that I really liked. There were also lots of people in traditional tango costumes posing for pictures (hello tourist trap) and even a guy that had groomed himself to be a dead ringer for Maradona posing for pictures. 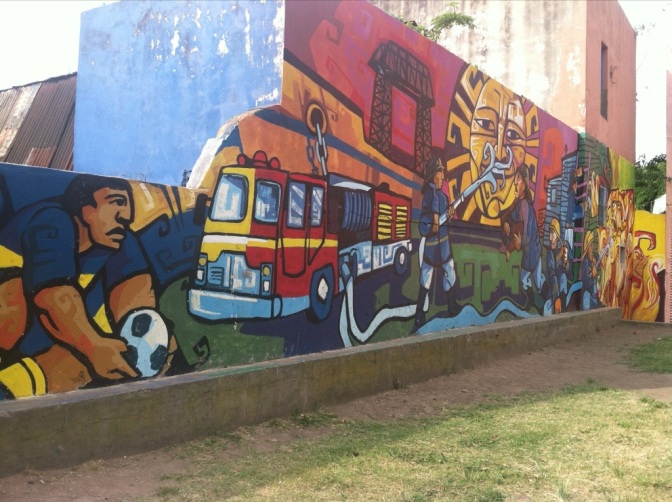 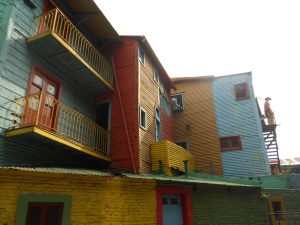 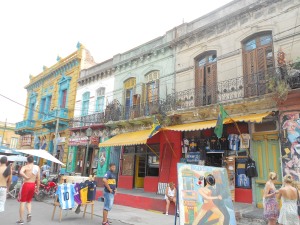 After Caminito we had to head home for our Green Toad planned Tango Night during which we would be experiencing a tango lesson (ugh) followed by a tango show (much more my cup of mate). We showed up on time for the lesson dressed in “dressy casual clothes” and “shoes appropriate for dancing on wood floors.” Which for me meant my 6 inch heels. I mean seriously I had no other option, I wasn’t going to dance in sneakers flip flops or rubber soled wedges.

The lesson started perfectly on time by Argentinian standards (so about half an hour late) with a mix of tourists from all over the world, most of which were probably there as a post retirement treat – so a bit on the older side.  Oh well, at least there was one cute young Australian guy I could try to impress with my dance moves. Oh wait, nevermind. I can’t dance for shit.

The lesson actually turned out to be a lot of fun and VERY basic which was perfect for me. And a few more people without grey hair showed up which kept the lesson from looking like it was being conducted in the senior center.  Plus I also got to partner up with the instructor to learn the final dramatic tango pose which was pretty sweet.  It was however, not pretty sweet when we were dancing and switching partners I kept getting asked to dance (you’re not allowed to say no) by one of the younger guys who had showed up in ratty khakis, a dirty shirt and smelled like damp stagnant laundry.  Also not cool that he would swing me around with all the grace of a bull in a china shop and lead me (men always lead in the tango) with the completely wrong steps while yelling at me to make eye contact with him.  If it’s true that dancing is an indication of how good someone is in bed, I feel bad for some prostitute somewhere.

After that we headed to watch the dinner and a tango show which was actually fairly decent for a tourist excursion, and my steak came out close to how I actually wanted it. Not too shabby.  The show was also awesome. It attests to the fact that dance is truly an art form since I couldn’t understand a word of the singing that accompanied the tango but I was still able to grasp the concept of the show. It’s the age old story of boy meets girl, boy tries to impress girl, girl pretends not to be interested, girl flirts with other guy to inspire jealousy, guy gets jealous, and they end up happily ever after. Remember kids, if the tango teaches you anything its jealousy = good relationships. But seriously it was interesting to imagine a time when if a guy was interested in you in a social setting instead of shooting $500/bottle champagne at your face from his bottle service he would extend his hand in a gentlemanly gesture inviting you to dance, and then you were expected to be coordinated enough to follow his lead while he swept you around the dance floor. I definitely would not have met any men back in the day.

After dinner and the show we were all dressed up with nowhere to go, so I asked the Australian if he knew of anything going on that night. He was staying at Milhouse, THE party hostel in Bs As and he said that a lot of people were going to a club but not till much later since no one in Bs As goes out until around 2. Unfortunately my companions wanted to go home and I didn’t have the balls to go out by myself with these guys so we went back to the hostel.  Sad panda.

I figured at the very least I’d get some blogging done at the hostel and maybe call my parents. I got about 5 minutes into both when the power went out in the hostel and for the entire block.  Sweet.

I decided I would continue writing offline but first, I would get a beer. Which instead meant I ended up hanging out by headlamp and candle light in the hostel kitchen for three hours with the Israeli hostel manager while sitting on bean bag chairs, drinking Quilmes with ice, talking in Spafranglish and killing cucurachas. Typical. 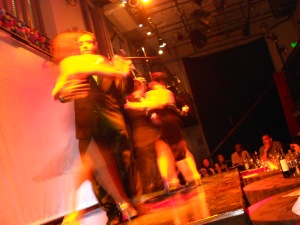