Following the lovely 25 hour bus ride from Foz do Iguacu we were finally in Rio! Time to party!

When we got to our apartment in Copacabana Lianne and Gian had already arrived and intelligently taken all the keys to the apartment.  Very quickly, our host showed up and we got to see our second airbnb purchase. Amazeballs. We walked into a giant living room with two huge posters on the wall of Amazonian (?) tribes people. We then set out to explore the apartment which turned out to possess a dining room with a table set for 8 people, a full kitchen, a laundry room, a storage room with shelves, 4 bedrooms 3.5 bathrooms and one weirdly locked door in the laundry room which is where I assumed he kept the dead bodies of the previous renters. Or it was the torture room. Or something. Damn you Tarantino.

Fortunately, Lianne and I had thoroughly scouted out the apartment online before moving in and she had claimed the master bedroom for us to share, which incidentally was the only place in the house where you could get wifi… and only if we hung out of the window for a few minutes to pirate the internet.  State of the art mechanics right there.

Obviously the first order of business was to check out the legendary beaches of Rio so we walked 2 blocks to Copacabana beach.  It was also time for some booze, and as we quickly learned, there are no open container laws in Brazil – always a big selling point in my book.  And obviously the first drink I would need to consume is a caipirinha while my feet were in the sand.  And for those who wanted to be lame, there were also fresh coconuts.  Le sigh…some people just don’t know how to party. 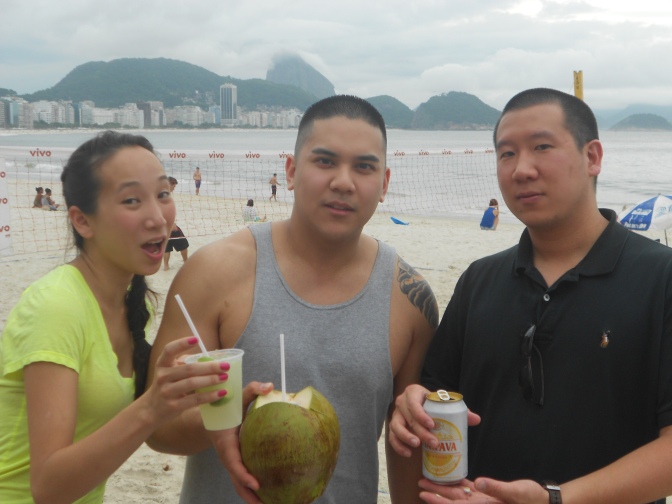 That night, we went to dinner and then walked around looking for a place to drink. The entire city was dead. We barely saw a single person out except for at a lively gay bar but then ended up deciding on Belmonte (a boteca chain) where we got some ehhh food AKA my French onion soup was literally gravy with raw onions, oh and Mark lost his tooth biting into a pernil sandwich. We were off to a good start.

Upset at the dental disaster, and disappointed in the fact that the legendary Copacabana beach area was about as lively as a funeral we headed home. Idiotically, we didn’t put 2 and 2 together and realize that the first of 5 nights of Carnival was the next night so people were wisely resting up. Stupid Americans.