It was time to head to Mysore aboard an Indian train.  Here goes nothing.

Our random selection of an AC class ticket ended up a fine choice.  While there were bare, dirty feet everywhere (ughhh) we were provided with a sealed bottle of water and an in-train meal.  The nice gentleman sitting next to me gave me a tour of my tray, so at least I knew what I was eating.  And how wrong could I go with rice curds (dairy…definitely not pasteurized), milk with coriander and onion (dairy again; raw veggies), spicy pickles, and rice with veggies which were probably both safe – oh wait, this is public train food we’re talking about.  I tried it all and finished the delicious milk/coriander sauce.  Whooo!  This is what passes for living on the edge in India. 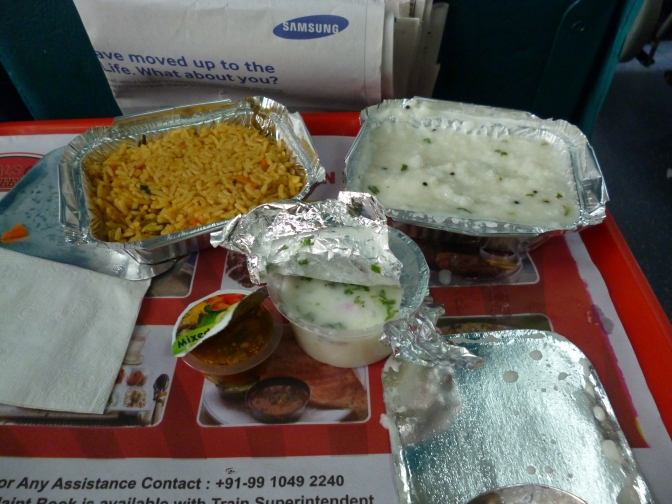 After renting a tuktuk for the day, the first stop was Mysore Palace, which used to house the royal family when Mysore was the capital of the state.  The palace was unique since it was built in a combination of Indian, Middle Eastern and European architecture.  So basically there were columns, domed roofs, stained glass windows, arches and then murals depicting Hindu gods, Indian royalty and bagpipers. (Side note: no photos allowed inside the palace)

Following the palace it was up Chimundi Hill to Chimundi Temple, which is one of the most famous in Mysore.  Unfortunately, once again we got too late of a start and were unable to visit the actual temple but another “nice” local boy began to give us an impromptu tour.  We had discussed earlier in the morning how the guidebooks said to avoid this at all costs since:

These children are very chatty and good salesmen and you may like them, but they should be in school instead.

Thank you wikitravel.  Accordingly as soon as I saw him wander up I left to go buy a lemonade.  When I went to catch up with the others, the kid was still in tow telling us there was an alternate temple we could enter which Aracely and I both declined.  Mark ignored our subtle apprehension stating, “Why go to the temple and not go in?  The whole point is to go in,” and strutted off with the kid.  Face palm.  After the “tour” 200 rupees (~$4) was demanded which Mark refused to pay.

In keeping with our pattern of unofficial tours, instead of returning us to our hotel our guide decided to take us around Mysore in the tuktuk – stopping at a Nandi of Mysore, a giant statue of a bull that he said was carved in 24 hours from a single piece of rock (only half true; I think you can guess which half).  We then moved onto a church and a mosque down the block from each other which he told us was built by the Maharaja to encourage religious freedom and unity within the city.  I’m too lazy to read a history book and look into the validity of that.

Following the religious monuments, we were taken through the Muslim neighborhood into a dark alley way where the driver parked the tuktuk and led us down a corridor.  We walked into a random building  that was filled with dirty backpackers wearing patterned genie pants and smelled of incense.  As it turned out it was a shop that specialized in oils made from the famous  locally grown sandalwood which according to our very accurate tour guide was illegal to be harvested by anyone not from Mysore except specific dealers.  The vendor rubbed a shit ton of oils all over us that he claimed had various healing powers. Then we had a staring match which we won when he finally accepted we weren’t interested in buying anything.

Apparently everything in Mysore is a tour.  Anyone who tells you differently is selling you something.