I woke up bright and early at 7am to go to the Taj Mahal and considered staying in bed because I wasn’t in the mood for touristy things.  Really what could the Taj Mahal be other than a giant tourist trap.   I had seen pictures and it was cool, but it couldn’t be that much more awesome in person. I mean people come to NYC to see the Empire State Building and I personally don’t love it.  And the bed and air conditioning at the 5 star hotel was pretty comfortable.  Or this may have just been the massive post Holi hangover talking.

Reluctantly, I pulled myself out of bed, put on pants and a long sleeved shirt despite the heat (damn conservative country!), threw my camera and barf bag into my purse and headed down to the car.  At least I learn from my mistakes.  Once we got into the car the driver asked us whether we wanted to take the scenic route or the expressway.  Not wanting to miss anything, we opted for the scenic route and then all proceeded to pass out 10 minutes into the ride.  When we woke up, we were at the state line check point to get to Agra and the driver told us not to open the doors or windows for anyone while he got out and sorted out the tolls.

No more than a minute after he left a monkey swung itself onto the window. It had a rope around its neck (as a leash, not a noose) and Aracely took a picture of it.  Of course right behind the monkey was a boy who was now demanding money for the photo of the monkey.  Face palm.  She refused and he started yelling and banging on the window.  And then he opened her unlocked door.  Fortunately she was quick enough to grab the door and lock it and then we all played the awkward game of lock your car doors like you’re driving through Compton and look straight forward with your sunglasses on.

A few minutes later the driver returned and we were back on the road.  After a quick lunch/souvenir stop (someone’s always trying to sell you something) we arrived in the busy streets of Agra and picked up our guide.  And while our guide was fairly informative he was also one of those people who loves the sound of his own voice and likes to reiterate points by repeating the same facts over and over again. Which I guess worked since here are the facts I retained about the Taj Mahal.  He also started every sentence with the following…

It is notable that:

But truly, the Taj Mahal is one of the most beautiful monuments I’ve ever seen, and it’s no wonder it’s consistently listed as one of Seven Wonders of the World. It’s almost scary how much it actually resembles the pictures – in fact the post cards I bought do the Taj no justice as to the ornateness and attention to detail that went into the creation of this giant tomb (sounds much less sexy when you call it what it is). The only downside is it is absolutely overridden with tourists. As you can see from my pictures, unless I was aiming at least 7 feet up there were shit tons of people everywhere.  The other downside of being a western tourist at the Taj Mahal is you shouldn’t assume because it’s a tourist attraction it will be devoid of Indians judging you for your cutoff denim shorts and spaghetti strap tank top (AHEM Aracely).  It is still an Islamic monument that contains a mosque on grounds so if you’re wearing something revealing, or are white in general be prepared to be asked for photographs – or just have them taken of you when people think you aren’t looking.  Don’t say I didn’t warn you. 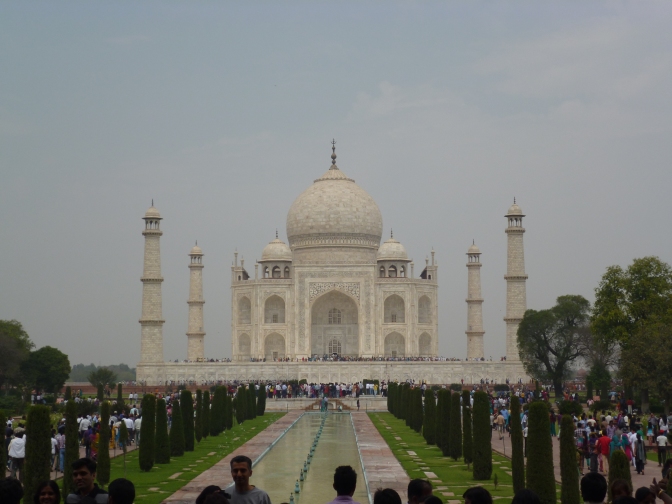 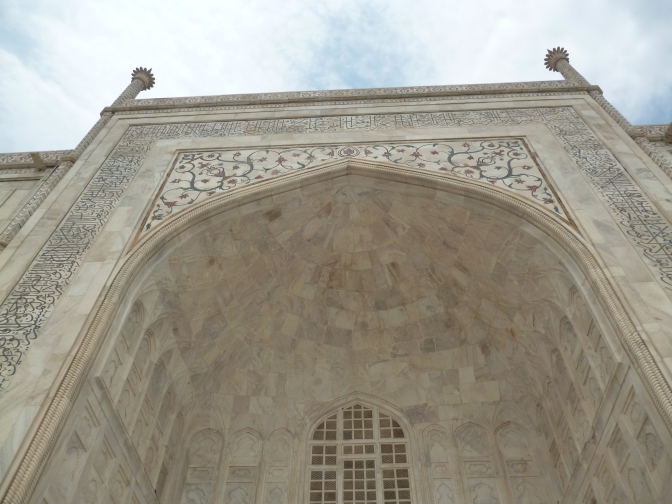 After the Taj it was off to lunch, then a quick stop to the factory where the sons of the craftsmen who did the original Taj inlays were still creating custom marble pieces.  Guess who got suckered into buying really expensive souvenirs?  We also drove by the Red Fort which was closed by the time we got to it and then headed home, significantly poorer in my case.

2 thoughts on “The Taj Mahal”