Seeing as I had come home approximately 2 hours before I had to be on Khao San Road to start the bus journey through Southeast Asia I was none too awake when we got to the Stray office. There were two other guys plus a tour guide that would be with us heading to Ayutthaya, the old capital of Thailand. As soon as we started introductions I announced to the group that I was hungover, hadn’t slept and had been dancing with prostitutes and ladyboys the night before. I’m big on good first impressions.

About an hour or two later (I have no concept of time because I was sleeping across a full row of seats and spooning my club soda) we arrived and were told the activity for the afternoon was a boat ride through the city’s canals where we would be able to see temples. There would be some traditional Thai temples as well as some that had Khmer influence.

Only half functional, what I got out of the tour was that there were large golden Buddhas, monks that throw water in your face when you walk by, and giant cocks. It was also hot as fuck and by the time we got to the awesome looking Khmer temple we had no desire to get off the boat and just wanted to get back to the air conditioned tour office and chug a bottle of water. Hooray culture. 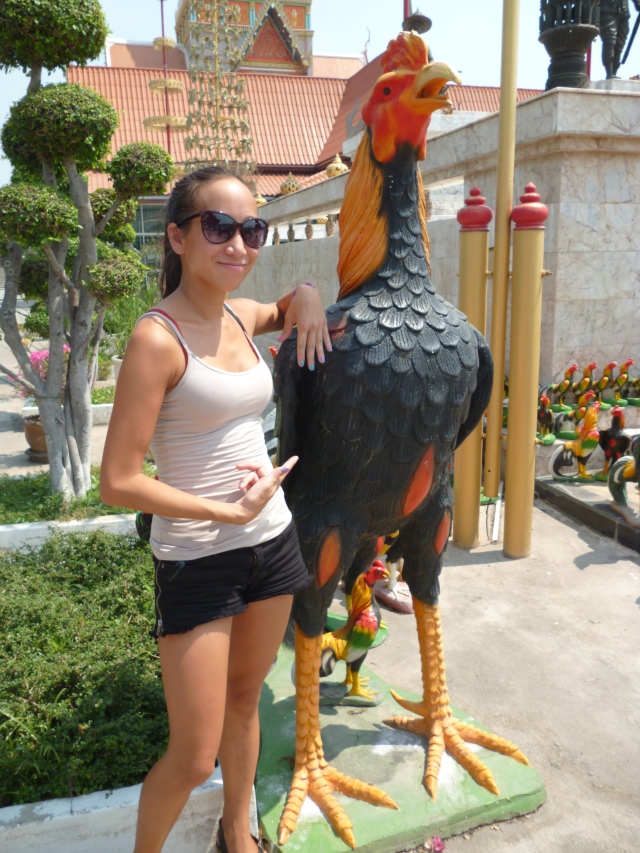 As soon as we got back to the office I tried to watch Game of Thrones on my laptop but instead just passed out on the floor, enjoying the feeling of the cold tile against my sweaty face. Finding this unacceptable, our tour guide took us outside and announced it was time to start drinking. Worst tour guide ever.

And by worst I mean best, because once you start drinking when the tour guide is Irish and the two people you’re drinking with are Belgian and German, clearly moderation is not the name of the game. The name of the game was actually “Fuck the Dealer” and “Kings/Ring of Fire” which succeeded in getting us quite tipsy. Not too long after (or so it seemed) it was time to take a pimped out tuktuk to the train station to go to our next stop of Chiang Mai.

Once at the train station we had some time to kill and the Worst Tour Guide Ever told us that while there was beer for sale on the train, probably no one would notice if we happened to have our own for some reason. And coincidentally, there was a 711 across the street if we wanted to take a walk. Not that he was encouraging smuggling alcohol or anything. Getting on the night train, I was actually pretty impressed with the setup. There were top and bottom bunks, racks for luggage, and bins and pockets where you could store your shit on your bunk. I locked up my suitcase, took my purse with me and headed off to the disco car at the suggestion of The Worst Tour Guide Ever (now his official title as declared by consensus of the group).

I quickly drank my first beer and then ordered another one wanting to save my Siamsoto for later…also they didn’t sell that on the train so they would’ve noticed me smuggling it in. The last car AKA disco car was full of drunk backpackers being tossed from side to side of the train as the lights went down, strobe lights went on and music started blasting. We ended up making friends with some dudes from Boston who joined us for a game of Kings.

A few minutes after meeting them as is common in Thailand, the topic of prostitutes came up and in my drunken state I mentioned that Thai prostitutes didn’t really faze me that much. Once I put that on the table one of the Bostonians revealed that he had a great story.

Apparently in Bangkok, they had met two girls that were bartenders at the club they were hanging out at, and ended up chatting with them all night. When the club closed, the girls invited the guys to go to another club, so they all went. One thing lead to another and eventually they took the girls home and continued the party. The next morning at breakfast the girls asked for some money. Assuming they just wanted cab fare the guys said no problem and asked how much it was. When one of the girls said 7000 baht (roughly $230), they got the picture that it wasn’t for cab fare, and they weren’t regular slutty girls. On principle one of the guys refused to pay and the other gave what was in his wallet which was something like $50. Worst prostitutes ever. Great story though.

Around 10 o’clock the disco car closed so I figured it would be a good idea to use the toilet before heading back. Bad decision. Have you ever tried peeing while squatting over a toilet on a moving train? Let’s just say I realized the liquid all over the floor was probably not water.

Unable to find The Worst Tour Guide Ever and the rest of my group, I met a French dude walking back and being fairly intoxicated, I decided I felt like speaking French. Not ready to call it a night at 10pm, I told him I had a bottle of shit Thai wine in my purse and that we should drink it since the French love wine so much. We passed his bunk, so we sat there drinking the wine and chatting in French. A while later, adequately drunk, I told him I was calling it a night and headed home.

While he was hesitant to let me leave, my superb French skills eventually convinced him that I was in great condition to wander through the train to find my bed. As I stumbled to the front of the train I tried to pull open the door leading to the next car. It was stuck. I looked around for a lock release button, pressed it. Still nothing. I tried to gesture to the attendant that I needed to get to my car to sleep, to which she responded “Lock open morning.” #FML.

What the Worst Tour Guide Ever had neglected to mention to me was that for security reasons, the train cars lock between 11pm and 7am or something like that. #VDM

I casually strolled back up to the French guy’s bed, opened the curtain and awkwardly asked if I could spend the night since I was locked into his train car. If only life were that simple for all guys. Or I guess if you’re reading this and planning on taking a night train in Thailand you now have your strategy for getting a girl to share your bed. You’re welcome.

When I woke up in the morning the French guy was probably startled to find some random chick in his bed who was now completely incapable of speaking French. But as is customary of awkwardly waking up next to a stranger we exchanged morning pleasantries and emails so we could find each other on Facebook.

Returning to my train car on a bizzare “walk of shame”, I tried to slip into my bunk unnoticed. Unfortunately, as soon as everyone woke up in the morning the first question out of everyone’s mouth was “so…where were you last night?” complete with raised eyebrows and a shit eating grin. When I told everyone what had happened 1) no one believed me 2) the Worst Tour Guide Ever claimed “oh, I thought I told you the cars lock at night.” Oh fuck you Worst Tour Guide Ever.

Fortunately as things turned out, when I did add the French guy on Facebook we had a mutual friend in common. My cousin. He had met him at a concert when he had come to the states and my cousin had tried to couch surf with him in Canada. So I guess it was fate that someone in my family would eventually end up sharing sleeping quarters with him. Not that that makes it much better that I had to sleep with a stranger on the train, but at least he knows my family. Or something like that.