After several consecutive days of nature/outdoorsy shit, I was ready for a city. Fortunately, the next stop was Wellington to catch my first rugby game and hopefully do something that didn’t require me to wear sneakers.

We had a only a few hours to explore the city, so we checked out Oriental Bay, so I would no longer be disoriented (get it!) and got some awesome fish and chips and ate them on the beach. I also checked out the beautiful scenery – holy shit guys in Wellington are hot. And the chicks too – everyone was fit and gorgeous. I’m going to need some more time in this city. Oh and also the actual scenery was great too, the small beaches were rather pretty and astonishingly clean considering they’re in an actual city.  The water was kinda cold though. 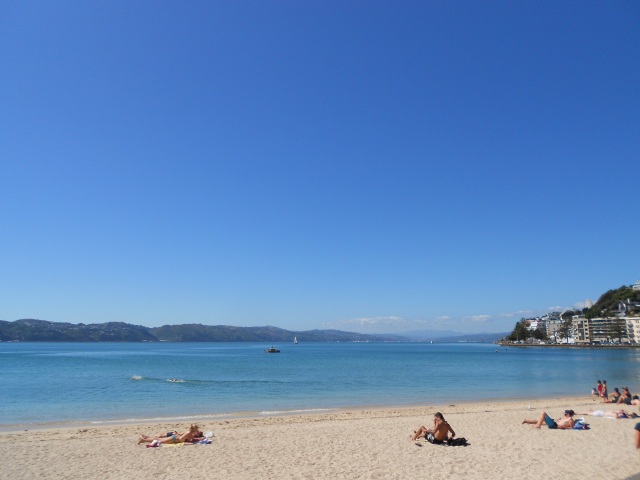 Post beach it was off to see the Hurricanes vs the Crusaders. The Hurricanes were the home team, but favored to lose, which I knew nothing of I just wanted to get drunk and see a good match. And….mission accomplished. We ended up sitting next to a chick that was a huge fan and willing to put up with me drunkenly asking her all the rules throughout the game. And the cherry on the top – the Hurricanes won! And the cherry on top of the cherry…after the game we got Korean food and then I passed the fuck out on the ferry to the South Island. Perfect night in my book.

Unfortunately, waking up the next morning on the ferry and having to stumble into the car is not so perfect, especially since we had to drive the car off the boat across the south island to Hokitika in hopes of catching the wild foods festival. Longest drive ever after a night of drinking. Especially when we learned that towns were miles apart, and some didn’t have gas stations open in the middle of the night. Which is extra awesome when you have no gas and have to roll down the hills hoping not to break down in the middle of literal nowhere. I mean nowhere nowhere. I mean I could’ve ran for an hour in any direction and not seen a single other human being. I wonder if I got enough sheep to fart into the tank if it would keep going. Fortunately, it didn’t come to that and after driving around on empty for half an hour we found the only gas station for miles.  I’m not sure whether I should have thanked or cursed the lying gas tank needle.

On the bright side, getting to Hokitika to eat good food gave us all a second wind as we were hungry and ready to try something adventurous and delicious. The first thing we came across was some kids chopping logs. Which didn’t look like a food fest to me. One of the kids wandered up to us and held out a tray.

Well….at least they were fresh? Mark manned up and ate a small live one and said it wasn’t bad. I wasn’t convinced, but after Aracely also tried a fried one I couldn’t be a pussy and tried a grub as well. Here’s what I thought of it. 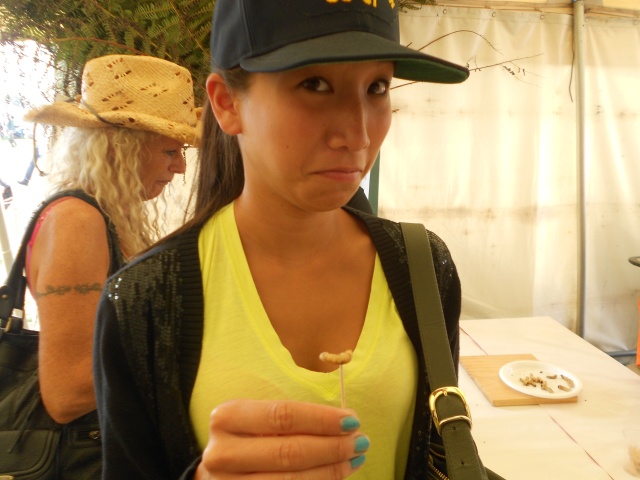 My first qualification was that it did not gush in my mouth.  (TWSS)  If I got a slimy mouth full of grub guts I probably would’ve vomited.  In fact, the grubs were kind of nutty and had the texture of something like a blood sausage (not quite accurate but best I can do) with a thin membrane on the outside and a soft interior.  Really not too terrible, more of a mental roadblock than a taste or textural one.

After that it was onward to kina (sea urchin), kangaroo, crocodile, wallabee, rabbit, fallow deer, goat, wild pork, crickets – and then the milder choices of Memphis BBQ ribs (sometimes I miss Amurrrica) and a tuna sampler. We also got to see an airshow which was another first for me.

Despite the fact that I’m actually quite fat, the real reason behind driving to the South Island was to see a glacier for the first time. The town of Franz Joseph Glacier was probably smaller than my graduating class from high school and kind of grey and depressing. And the glacier left me feeling like Mckayla Moroni – not impressed. But at least I could say I came I saw I left.

The next stop was Abel Tasman National Park – one of the biggest tourist attractions in NZ. Unfortunately we had gotten too late of a start to do a hike and cross a suspension bridge as I had hoped to do, but instead we packed lunch and hiked out to Cleopatra’s pool which was a nice relaxing place for a picnic. And don’t let the sunshine fool you, the water is ice cold. However, once some canyoners come down and go down the natural waterslide, and then two teenage boys also do it sans gear, it I had to do it just to say I fuckin’ did it (said in Drake voice). And it was fun. But as much as I joke that I have the body of a 12 year old boy, apparently I don’t and my ass ended up getting slightly stuck in the slide and I came out with some bruises and scrapes on my derriere.  Oops.

The next day’s activity was a wine tour, followed by staying in NZ’s best hostel Paradiso – which had a pool, jacuzzi, sauna, free breakfast, free soup and free wifi. And while the rooms were average the facilities were awesome and quite conducive to socialization. Also, Australian Pictionary with a drunk international crowd is quite interesting…ever tried drawing “Bear with a lump on it’s head” and get a German girl to figure that out verbatim. Super simple.

In my drunkeness I offered to cook us all dinner and also may have cooked with dish soap instead of oil. That’s what they get for letting the drunk person be in charge of anything.

3 thoughts on “Wellington & the South Island: I Ate Grubs at the Wild Foods Festival”